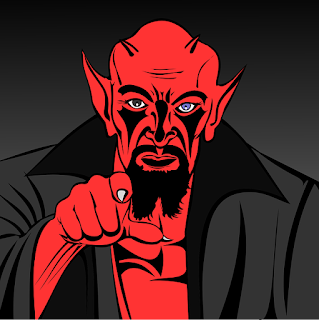 Satan can war against you. But, honestly, the main way he gets people is the safest road to hell. “Indeed the safest road to Hell is the gradual one--the gentle slope, soft underfoot, without sudden turnings, without milestones, without signposts,...Your affectionate uncle, Screwtape,” C.S. Lewis wrote in the Screwtape Letters.

Eve was deceived in the garden of Eden by Satan. (1 Timothy 2:4). Adam sinned and knew exactly what he was doing. But, notice how the first sin by man was due to deception. Satan told Eve she would become like God. It's in Genesis 3:1-7. He told her she would be like God and know good and evil. He further told her she wouldn't die if she ate the apple. Both were deception. If Eve ate the apple, she would be sinning. God can't sin so that was a lie. Satan's second deception was, if won't kill you. Yes, it did. Eve was perfect until she ate of the apple and never would've known pain, misery or death. So, yes, eating of the apple did kill her, just not right then. But, it did take her perfection away immediately. After Adam ate the apple, both Eve and he discovered they were naked and clothed themselves with leaves. Until they sinned, both hung around Eden butt naked without a care in the world, and no shame. In fact, once God came to them, He asked, "who told you that you were naked?" (Gen 3:11)

In Matthew 24:4-31, Jesus talked about the last days and used the word "deceive" several times. Deception is Satan's greatest weapon. Satan whispers in our ears, "do that. It won't hurt." If we listen, soon we are into all kinds of sin.

You ever heard someone say, "I wouldn't do that if I were you."

But, Satan's deception is two-fold. Not only does he lie to you about something like he did Eve, he tells you the punishment for doing won't be anything really, therefore, massaging your pride. Satan's sin was pride and the Bible says, "Pride goeth before destruction, and an haughty spirit before a fall." (Revelation 16:18) (KJV) So, not only does Satan tell you do something with deceiving lips, he deceives you into telling you the cost of the sin won't be a big deal. "So, you cheat on your wife? Plenty of people do it. Keep it a secret and no one will ever know." Hmm... but, who exactly does know? Well, you do.

Basically, Satan lies to us with the temptation and the price will we have to pay, because we are ignorant. Ignorance is where he works. Read your Bible, study it and meditate on it. Ever notice how the ignorant are so easily deceived? The same is true for Christians. The more you know the Bible, the less ignorant you become, and the less likely to be deceived.

Satan and his ilk hate your guts. Why? He's the opposite of Jesus. Jesus is love. Satan is hate. Jesus is goodness. Satan is evil incarnate. Jesus is gentle and meek in spirit. Satan is cruel and a taskmaster. His yoke is brutal. But, Jesus said, "my yoke is easy." (Matthew 11:28-30) What is a yoke? A yoke is what they used to put on oxen so they could plow the fields. Jesus wants not to add to your burdens. Satan will add all kinds of things to your burdens–sin being one of them. But, Jesus takes away the sin of the world. (John 1:29) Jesus removes your burdens and takes them onto Himself.

"Let no one say when he is tempted, “I am tempted by God”; for God cannot be tempted by evil, nor does He Himself tempt anyone. But every man is tempted, when he is drawn away of his own lust, and enticed. Then when lust hath conceived, it bringeth forth sin: and sin, when it is finished, bringeth forth death. Do not be deceived, my beloved brethren. Every good gift and every perfect gift is from above, and cometh down from the Father of lights, with whom is no variableness, neither shadow of turning. Of his own will begat he us with the word of truth, that we should be a kind of firstfruits of his creatures." (James 1:13-18) (KJV)

God will never tempt you. Satan does the tempting, just as he did Jesus in the wilderness. Satan tempts your lust. And, you give in to temptation, not anyone else. You are responsible. Satan offers you only sin and death. Jesus, on the other hand, says, "And we, out of all creation, became his prized possession." (James 1:18 NLT) The Holy Spirit inside you will help you resist temptation! "When the enemy shall come in like a flood, the Spirit of the LORD shall lift up a standard against him." (Isaiah 59:19) (KJV)

Do you have the Holy Spirit? See: https://www.transgenderchurch.com/2020/10/the-baptism-of-holy-spirit.html

YOU NEED THE HOLY SPIRIT BAPTISM! Being a Christian without the Holy Spirit is being a soldier without fatigues, weapons and a helmet!

You are God's prized possession and Satan HATES YOU! Honestly, has Satan ever done anything for you? Really? Nope, not one thing! Jesus, on the other hand, has paved the way for us with complete and utter victory over everything, especially Satan and his ilk. When Jesus died on the Cross, he took away the sin of the world. We only have to repent and ask Jesus into our heart to be born again.

Do you know Jesus?

Well, it is easy to know him and experience his undying, unfathomable love and affection.

He came and died for you.

"For God so loved the world that He gave His only begotten Son, that whoever believes in Him should not perish but have everlasting life." (John 3:16) (KJV)

There is no greater love than Jesus.

Accept Him today if you don't know him.

"Dear Lord Jesus, I know that I am a sinner, and I ask for Your forgiveness. I believe You died for my sins and rose from the dead. I turn from my sins and invite You to come into my heart and life. I want to trust and follow You as my Lord and Savior."

Now, go and tell someone and welcome to His Kingdom.